Set in the cloisters of Norwich Cathedral, but instead of a lawn beyond, it looks suspiciously like Australian clouds. I came across two young Salvation Army guys in front of the City Hall, who were going to, or coming from an event. I asked if I could photograph the Tuba, one of them had, in the bright sunshine,..The young woman (also a Salvation Army cadet) was part of a Remembrance Day parade, stood to attention. I developed the theme as I went along, to create the title! (IR – 84.07 x 48.66cm). 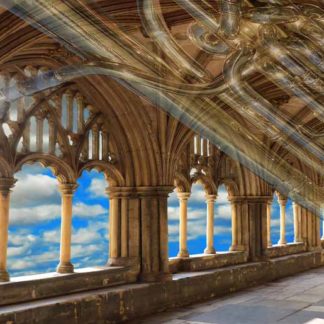