These plastic chairs were in field that was hosting a beer festival at Reedham. Unfortunately for the open air event, it was tipping it down with rain. Thats the reason the chairs were tilted like that. I thought they looked like giant insects. I never did anything with the photos for a few years, but then decided to use them. Once again it took a lot experimenting to decide the best setting for them. I settled for a stitched set of photos of Whitlingham lake. The problem was the disparity between the frames, one was a bit lighter or darker than its neighbour. So I hit upon the result you see, to cover a multitude of sins! Necessity is the mother of invention. (IR). 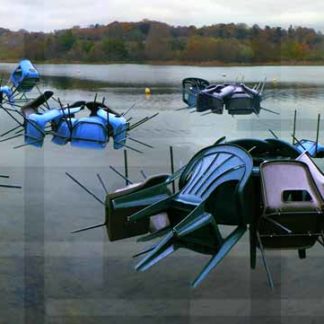