The skylight and wall below is in the Norwich School Of Art, my Alma Mater. I was attending an end of year show, and was stunned to see how much the building has been refurbished. Kids today eh?… don’t know how good they’ve got it! Anyway.. the Harley Davidson, which was parked up outside the Micawbers Tavern, looked good in the sunshine. I stretched it a bit and put it, as seen through the skylight. And there it remained, until I came back to the picture a few months later and added the handlebar photograph. This was a scooter that was asking to be captured. The sun direction complimented the existent image, so I included it, into the collage. The mirrors of course, reflected me, so I grafted a photograph from my Australian trip and invented the sun. (A1). 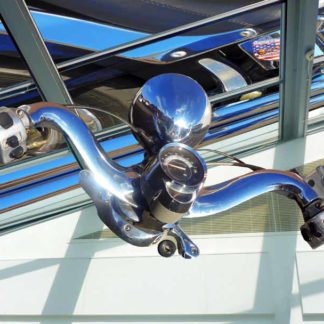