Half Way Down The Regent Road.

Half Way Down The Regent Road.

I went with some of my family, to celebrate my Aunty Marys 100th birthday. We stayed at a B&B, just off the Regent road which runs along what used to be a thriving dockside in Liverpool. I went out for a walk and was impressed by a very grand brick building, called Tobacco Warehouse. It is being refurbished to become a block of luxury apartments. Also on the road, to one side, is the Bascule Bridge, a drawbridge which obviously let cargoes of tobacco in, to an inner dock for unloading. Collaged behind the bridge is a view going through the Mersey Tunnel. I have put a factory roofline at the bottom of the building to cover over all the fencing and detritus that was there. I have called the picture Half Way….because the image is in two halves. Sadly, and to be expected, Aunty Mary passed away, a few weeks later. R.I.P. Mary Owens (9.8.1920 – 2.9.2020). (A1). 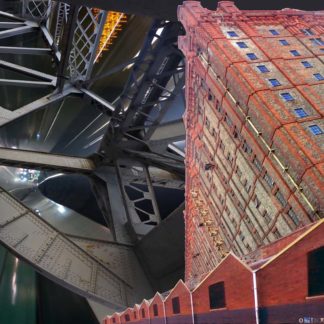 You're viewing: Half Way Down The Regent Road. £80.00
Add to basket